Breakfast For Some, Naps For Others 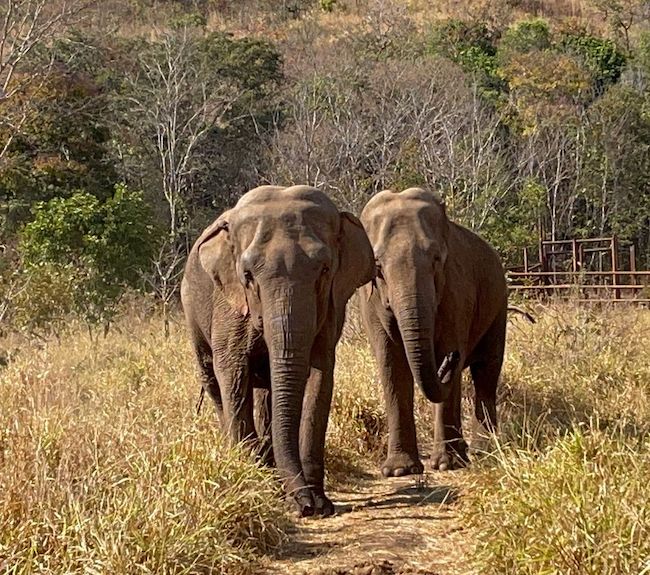 Bambi and Rana were spending time together at breakfast recently and Mara was off on her own. The two made an effort at calling for her – a few trumpets and some rumbles – but nothing like the loud, urgent bellows they’ve made in the past when Mara gets separated from them.

Scott brought breakfast to everyone, planning to feed Bambi and Rana together, and then Mara separately, because she was standing somewhat near Maia. He thought that leaving Mara to herself (without her Bambi bodyguard) for a while might encourage Maia to come closer, should she feel comfortable enough to walk that way. The two have not had any close interaction in a while and we like to give the elephants an opportunity to spend time together, if it does not feel forced.

At the first sign of breakfast, Rana and Bambi hurried toward Scott. Rana tried to stay in front, but the super-fast Bambi quickly overtook her. Strangely, before they got to the edge of the yard, they both just stopped. It suddenly seemed more important to them to look around and rumble a bit. The two moved a little closer to Scott, then stopped again. There was no apparent reason why they would get so excited to eat and then get distracted enough to change their minds. It’s just a reminder that elephants at sanctuary will do whatever they decide to do, even if the humans don’t always understand the whys. Eventually they did come over to eat and stayed there, seeming very relaxed, for almost 30 minutes.

Just after breakfast, although the two had access to each other, we opened the closest gate between Mara and Maia, but Maia stayed put for a few minutes. She eventually walked a bit in Mara’s direction and then dozed off a little. She woke up a few minutes later and moved about 30 yards from Mara, but just fell asleep again. Again, Maia woke up, took a few more steps and nodded off once more. Apparently, she was more interested in having a catnap than interacting with Mara that morning.

Watching Bambi’s newfound calmness and relaxed demeanor around Rana shows their relationship is maturing. Bambi appears to be finding more comfort within herself and her environment.

Bambi and Rana heading for breakfast

Your ticket for the: Breakfast For Some, Naps For Others

Breakfast For Some, Naps For Others