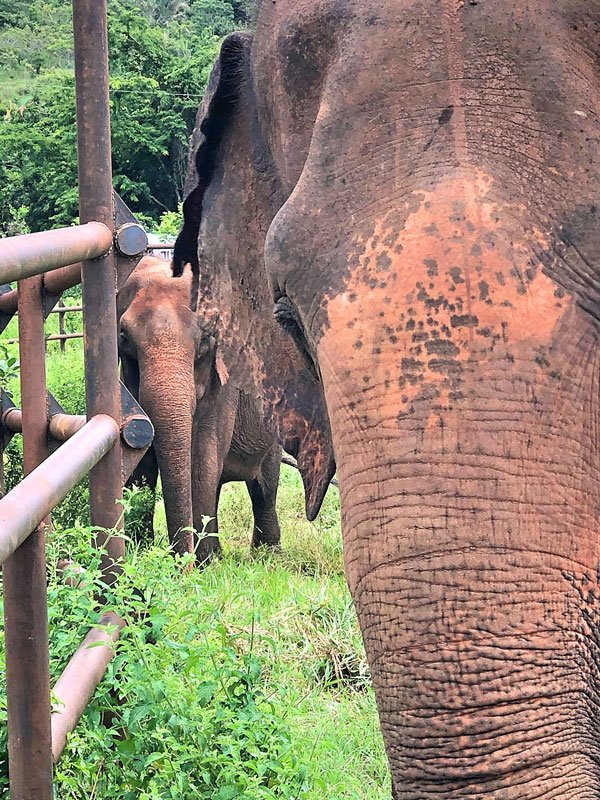 We wanted to touch base a bit on what happened during the time that Lady and Rana spent together in the first yard yesterday. The live video shows life at the moment, but the girls were together all morning, and a lot went into those few hours.

If you didn’t see the live feed from yesterday or read the post from yesterday afternoon, you should, it will help you understand the entire process better. Yesterday, when we opened the gate for Lady, she decided she was ready to share a space with Rana. After opening the gate, we sat and let her process and determine what she wanted to do. After about 10 minutes, when she seemed calm and curious, we put a couple of pieces of fruit a few steps outside of the barn and told her the choice was her. She didn’t hesitate for a moment and walked right out. Once she finished her fruit, instead of heading back into the barn (which was still open), she walked further into the yard. Rana, reading the room as she does, stayed with her palm and hay a bit off to the side. Initially, she looked up and extended her trunk a tiny bit in Lady’s direction, but did not move another muscle. She’s cute like that.

The two had the freedom to move through the yard as they chose, along with the gate being open into the second yard, should one want to leave. We gave them food at different times, but we don’t want them to be distracted the entire time they are together with eating, we want them paying attention to each other, thinking, and processing. This means there was a lot of time they were grazing or standing watching each other. Both girls remained very calm. The first time Rana started to walk in Lady’s direction, Lady took three somewhat hurried steps away, but stopped without being asked, turned back around, and settled right in. Rana, being the awesome girl that she is, stopped to allow this. At another point later on, when Rana was going towards Lady again, and it seemed Lady might turn away, Rana slowed her pace and approached more slowly. Rana really is phenomenal in these situations.

During their time in the yard together today, the closest they came to each other was about ten feet, which is pretty spectacular, especially with how mellow everything was. Both girls were still doing quite well when we decided to separate them after lunch. The decision was made because we looked at Lady at one point, and she looked like she was going to fall asleep standing up. She needed a little cat nap, and for her to be comfortable enough to do that, she would need her own space. Rana easily followed into the next yard, we closed up between her and Lady and opened up Rana’s yard to the bigger habitat. This also opens the space back up to Maia, who was further into yard four, most likely in the pond. Because of the fear that Lady arrived with, we are only introducing her to one elephant a time; two could be very overwhelming for her. Because of Rana’s gentle nature, and desire for new friends, she is the natural choice. This doesn’t mean Maia won’t have her chance, but as with everything Lady, baby steps.

Everyone was so proud of how brave Lady is with working to overcome her fears and how respectful and sensitive Rana is with allowing Lady to dictate the pace of things. The girls were surrounded by beaming humans, who were sometimes teary-eyed. Not only at how special the moment was but also how sad it is that Lady’s past has impacted her in such an unnatural and significant way that she has to really work to get to a healthy place. That being said, Lady is a rockstar. Since her arrival, she has been willing to put in the effort to try to overcome her past, to grow and heal, and that is all we could ever want for her. We are privileged to offer her any support she needs along the way.

photo- Rana up close, Lady not too far behind her ❤️

Read more on their pages: