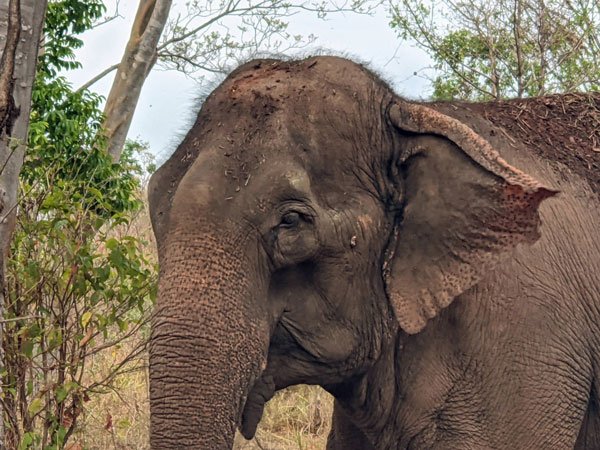 While the only area inside the habitat that burned was across the creek, the firefighters lit several other back burns a distance from the elephant fences to help protect the habitat.

Since the fire, the elephants have mostly avoided the burned areas. Not only have they not crossed the creek, but they haven’t approached the East fence near where the fires were. Lady has gone to the pond several times but hasn’t gone past it. Maia has gotten in the pond, but only for short periods to stand in it and splash. We haven’t seen her pond blob once yet. We have no way to know why – it could be an instinctive avoidance, or maybe they don’t like the smell, or perhaps they just haven’t wanted to do those things for an unrelated reason. While Lady and Maia remain happy to wander, they only go deep in the habitat for a few hours at a time since the fire. We respect their choices, so we haven’t asked them to go toward the burned areas or stay out longer. Lady’s wanderings shifted on their own, a few days ago.

In some ways, Lady is our bravest elephant, even though she is still nervous about being close to the other elephants. Lady has impressed us again – this time, by being the first elephant to approach the eastern border, close to the burned areas. We first saw Lady in that area on the cameras and went to check on her. She seemed relaxed and calm. She appeared comfortable drinking from the water trough and even did well for treatment along the fence. Lady ultimately stayed out there for a few days.

We don’t know what changed, but we are happy to see her shifting, on her own, further into normalcy.

Your ticket for the: Brave Lady. Again.