Scott hates long stories that start with a feeling of ‘Oh no, where is this going to go’ they immediately make him nervous about the point or the ending. Because of this, I will start by saying this doesn’t end badly. So breathe and relax. We have always stated that it’s important to give you the whole story, it is what helps people to truly understand what elephants go through, the damage captivity has caused and what it takes to heal. The problem is that the whole story is complex, it’s convoluted and it’s a process. It’s not instant and it’s often not easy. To believe that the first steps to sanctuary fixes everything diminishes all elephants have been through and all of the work they invest to help themselves heal. Yes, once in a blue moon it is quick and glorious, like Shirley and Jenny, but it’s not the norm. So over the next few days we’ll be talking about the shifting dynamics between cutie little Rana bug and her new family, Maia and Guida. We ask of you to hear our words and be open to their journey. We are normally good with questions, but we also ask you to wait until the last post for questions that we may answer along the way. When we get done, ask away.

Ok, to get a better understanding of the current dynamics, we are going to start from the beginning. As many of you saw through the live videos, the initial introduction of Rana to Maia and Guida went nice and smoothly. Uneventful in a pleasant way. There was a little bit of posturing, some of the girls putting their trunk over Rana’s head in a dominant way, over her butt in a dominant way and helping themselves to some of her food, but nothing substantial or anything that wouldn’t be expected with a new elephant introduction. 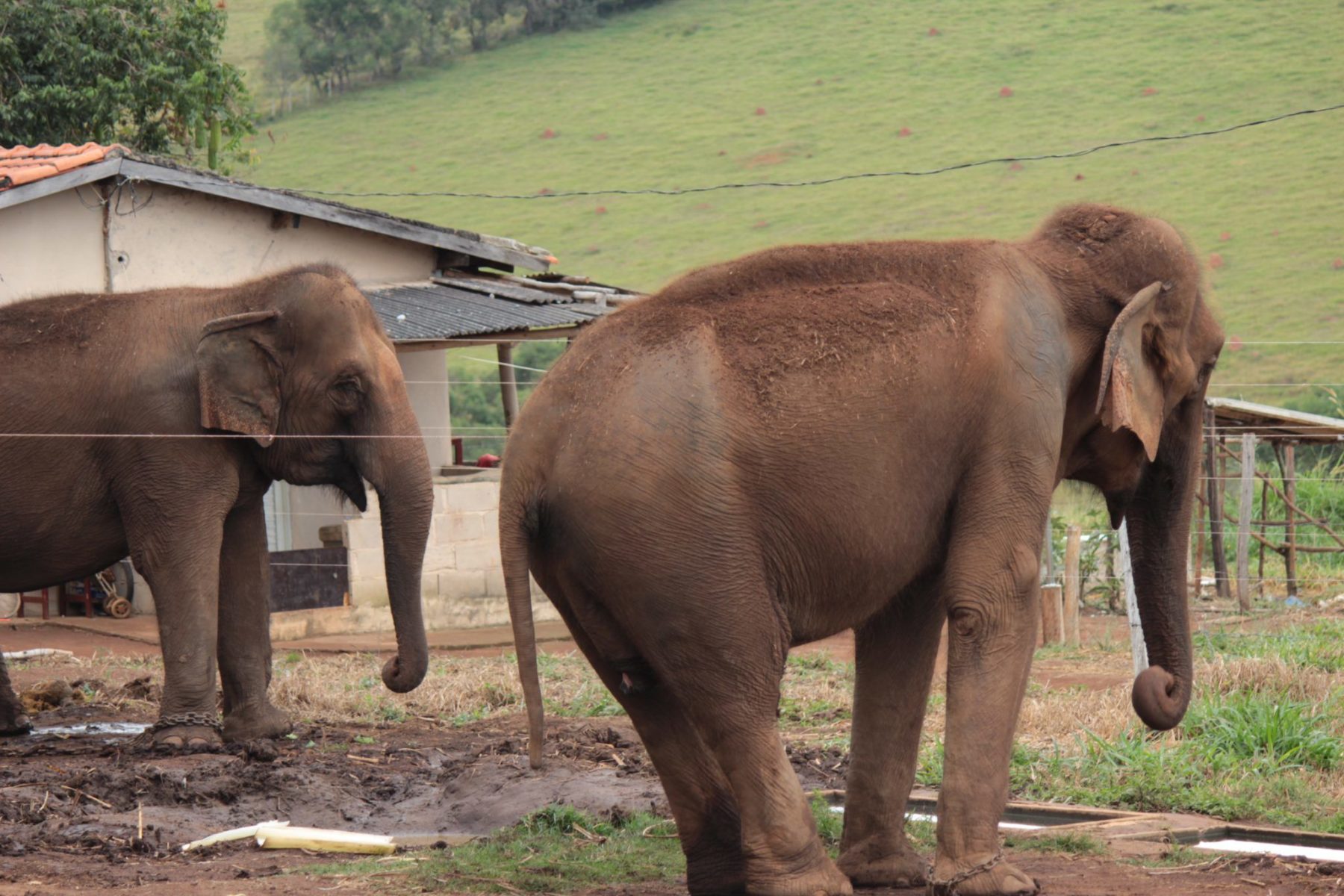 Maia & Guida chained on the circus farm (before sanctuary)

To bring a little more clarity to all of this, for those who don’t know Maia and Guida well, their relationship didn’t start off perfectly. They had an aggressive past, Maia would push Guida down when they lived with the circus and when chained in the rural farm they were kept at, and Maia would beat Guida up a bit. When they arrived here, that changed immediately, but they weren’t instant best friends. Guida decided she wanted to be dominant, which Maia (who is bigger in all ways) allowed, but then a couple of weeks in, Maia wasn’t so sure anymore. This is when we saw the kind of posturing mentioned above, but with intention behind it. There was a little bit of head shoving, purposeful displacement on Maia’s part, walking between the fence and Guida to push her off of her food, and that sort of thing, a general display of disrespect. There was one moment we weren’t sure if they were going to take it to the next step, but they decided against it and both backed away. They have never fought at sanctuary.

Maia & Guida Now: Adoring but Not Joined at the Hip

For those of you who have been watching our post through the past 6 to 9 months, you know that their relationship has evolved and grown exponentially but, they are also not attached at the hip best friends. They love and adore each other for sure, but it took them over a year for their relationship to be really positive, supportive and nurturing. Even now, with their relationship being incredibly close, they still choose their own path. There are many times we look into the habitat and they are close, but not standing with each other and times when they are on complete opposite sides of the habitat. We mentioned Maia will race out to the pond in the morning, leaving Guida behind to wander out at her own speed. Eventually they end up there together, swim and play and then graze and nap, but much of it does not involve them being side by side. They seem to like a bit of space and alone time. While many of you know this, this reminder will help to understand some of what we discuss next and in the future. 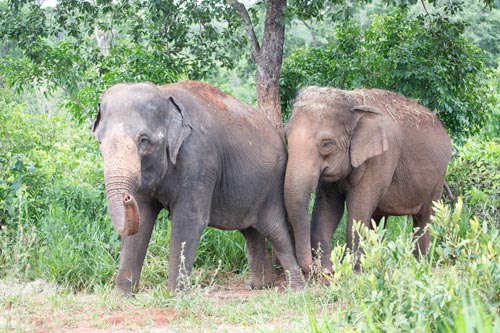 Back to Rana, as we mentioned, we spend the mornings with the girls, and some afternoons, in the habitat. We do this to get a better understanding of the nuances of their relationships and how things evolve in different settings. Clearly a lot transpires when we are away, time that is often critical for their personal and social growth. There were times with Maia and Guida in the early months when we would leave them after the 10 pm feeding and they would be all good with each other, but then in the morning they seemed very distant towards one another. Things definitely happen that we don’t see, but our times of observation provide insight to help us gain a more complete picture so we can help facilitate their comforts and their relationships.

After Rana’s arrival, Maia and Guida shifted their behavior and stayed close to the barn and close to Rana. On the third day we decided to encourage Maia and Guida out so they wouldn’t hang around the barn all day. This is just part of trying to avoid boredom and frustration that can lead to other negative emotions. That is the day that, surprisingly, Rana followed quickly out to the pond as well- we shared the video in an earlier post. Both Maia and Guida got out of the pond, Rana reacted the best way possible, with ‘happy’ noises, trying to engage them in a positive way and everything was good. After that the girls dusted and played in the mud together a bit. Towards the end of playing, Maia went to lie down (those of you that know her know she is a food coma napper- after breakfast, she naps.) She put her butt down, went to slide the rest of herself down when Rana trumpeted and went over to her. Maia of course got right up and Rana seemingly checked to make sure she was ok. For some reason, Rana seemed concerned with Maia lying down at that moment. The girls went back to grazing very close together and about a half hour later, Guida went to lie down. Once again, Rana trumpeted and went over to her, resulting in Guida standing back up. Part of us found it somewhat endearing that she was so concerned for her new big sisters, even though it’s the most natural thing for them, but the other part was somewhat concerned that neither Maia or Guida was going to appreciate not being able to lie down and get some sleep. And we were curious as to why she was not comfortable with them laying down to nap during the day.

A Drone Check on All Three Girls 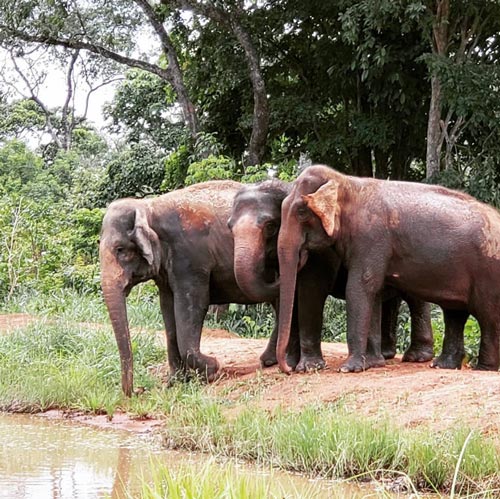 We watched for a bit longer, then drove outside of the habitat and up on the hill to watch if they settled a bit more. Maia and Guida split up and Rana chose to follow Maia. They went off and grazed a bit, everything was calm, so we left after about another hour. An hour later Wall-E went for a short flight to check on everyone– side note, we have a drone named Wall-E that a donor bought for us. The girls do not seem to mind it (you often get a different response from African elephants) and we fly it high as to not interfere with what is going on in the moment. On this trip we saw Guida still off on her own and Maia coming out from underneath some trees, less than a step behind her was Rana. Maia was walking at a pace that had some intention behind it, it wasn’t her normal calm grazing meander. And Rana didn’t want any space between them, shadowing her every move.

At this point we realized that Rana was being that new friend who instantly loves you, calls you every 30 minutes and wants to hang out every night. Her intentions were all pure and full of love, but she was coming on super strong. And from what we were seeing, her sisters weren’t 100% thrilled.

Your ticket for the: Behavioral Series 1: Breathe & Relax