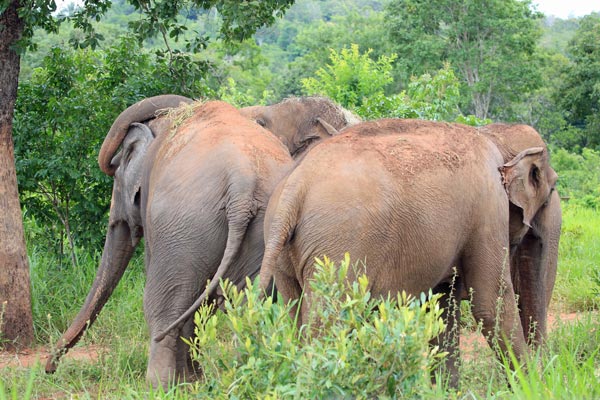 Being Happy for Rana

We went into that night feeling a little bad for Rana, because you can see how badly she wants it, but when we found her deep in the habitat, grazing away with a soft smiley face, looking as though she was loving life, we reminded ourselves that part of what we were feeling was our own stuff and we needed to let that go and be happy for all she was experiencing, because she was. And she doesn’t need us bringing her down. Life is good, it’s ok if ‘perfect’ is further down the road. 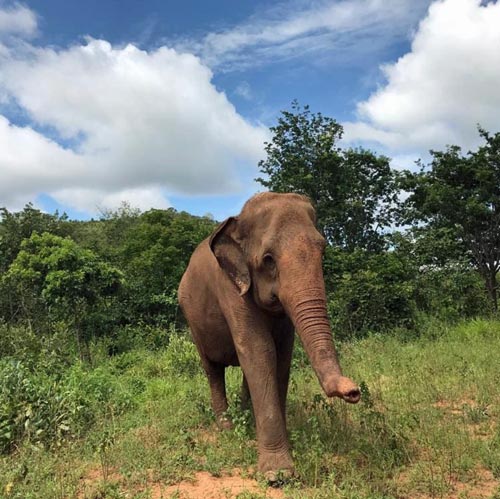 Since then things seem to wax and wane with how everyone is. The next day Rana didn’t even try to follow Maia and Guida, she happily went off on her own. When they did all end up back at the barn together, they remained somewhat close but she didn’t push, it seemed she had heard the message more clearly or took the time to let it sink in.

The Realization That Actions Have Consequences

One of the other lessons sanctuary elephants learn is a realization that their actions have consequences: this one is hard. It’s most difficult for those who have been aggressive or hurtful in the past, because they need to accept some responsibility in what they have done. Shortly after Maia and Guida’s arrival, Guida would simply leave if Maia was a little edgy. This forced Maia to realize that if she acted one way, Guida responded accordingly. It didn’t take long for Maia to understand that if she wanted more time with her friend, she was going to have to change some things. 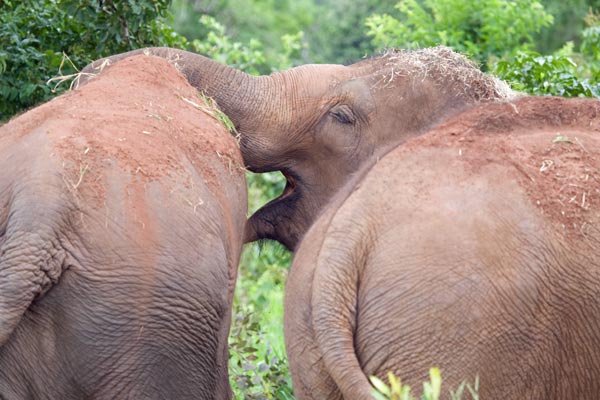 Maia’s trunk on Rana’s back. An example of posturing.

Back to the present- Some days Rana gets closer, if Maia and Guida go all the way out East, she stays on this side of the pond and they all meet up as the other two come back in that direction. It allows things to be more on Maia and Guida’s terms versus Rana trying to force things to happen. One day when they were all together Maia did the dominant trunk on Rana’s head, but took a little nap while there, then she did the same to her backside and napped a bit- Rana loved it. A different day when they were together, Maia was much less gentle, pushing Rana out of the way to get to where she was going. Guida is definitely less physical than Maia in her interactions (which is just true to their general nature) but she’s a little more mean spirited about what she does at times. For now they have lost a bit of the balance but it’s something they have to work at it. Remember, healing takes effort and dedication, especially with such a highly complex species and individuals who have experienced the depth of trauma they have in captivity.

Trumpets Near and Far

At the end of another uneventful day of some, but not too much space, we checked on the girls with the drone just as the sun began to set. Before we had a chance to spot the girls, we heard a little trumpet coming from somewhere close. The back of the 4th and 5th yard is just down a small hill from our house and you can clearly hear when they are there. So checking that area, we 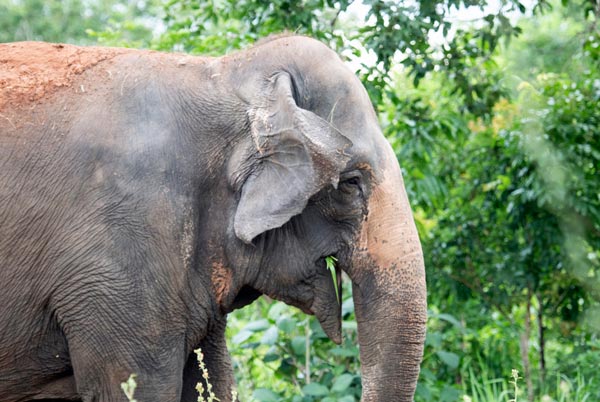 found Maia and Guida having a quiet little reunion, which many elephants like to do. Sometimes it’s after not seeing each other for a couple of hours, sometimes it’s just five minutes, but they will often celebrate coming back together. As we watched Maia and Guida you heard Rana’s blaring trumpet coming from somewhere else (she’s very loud vocally). We began looking to see if she was close, but she wasn’t on the same side of the stream as Maia and Guida. Rana’s noises intensified to include her roars, and we spotted her- moving quickly through the trees, throwing her trunk up and vocalizing.

Not knowing the emotion behind it, we decided to go down and make sure she was ok. We rode down the hill and stopped in the area she had been, but her next trumpet came from closer to the barn. Following the main road we stopped further down and there she was, still in the brush. We called her name and she stopped for a moment, and then popped out of the trees. We asked “What’s going on?” in a very light and silly tone and that was the start of the first Rana Rana dance party  Little Miss Bug began to spin and kick and walk over small trees, the whole while trumpeting, roaring and throwing her trunk about. It was very clear that her behavior was incredibly silly play. 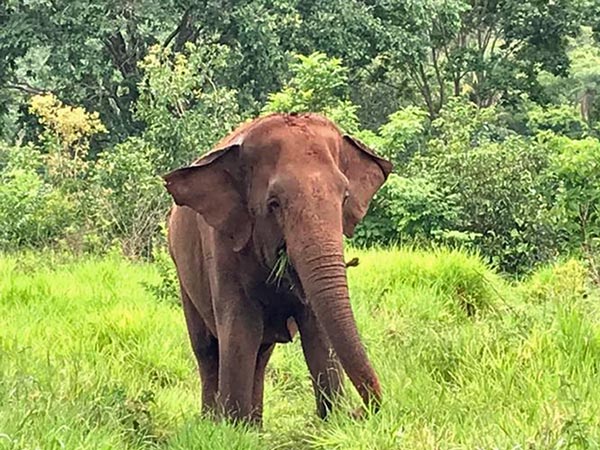 Because we were doubtful Maia and Guida were going to come and join her, we stayed with her to trumpet back and be that someone she could be silly with. Rana continued on for about 15 minutes, introducing us to one of her new sounds, the deflated trumpet. It’s hard to say there is a cuter vocalization and we’re sorry we didn’t even have a phone with us. It’s not like Guida’s small trumpets, but instead a trumpet that someone has let the air out of. We laughed more, she got sillier. After a while, although her sticky outy tail was telling us there was still some silly left, she calmed down and rumbled. After a moment, she walked over to the grass, relaxed started grazing. We took this as our sign to go and drove off telling her we would be back in a couple of hours for night feed.

We believe the whole scenario occurred because she may have been sleeping (8 pm seems a ‘normal’ time for her to lie down) and Guida and Maia’s trumpets woke her in a startle. Whether she was concerned, trying to find them, or happy we don’t know. What we do know is that when we found her she used that energy to be silly and celebrated a level of joy she may have never experienced since being in captivity and it was awesome. For everyone.

Your ticket for the: Behavioral Series 3: Healing Takes Effort