Rana was still coming back to the barn every night at this point, although not staying inside of it. To ensure her comfort and that she was able to rest fully, we had been separating the girls out at 10 pm feed. Rana would have access to her stall and yards one and five, while Maia and Guida would have access to their stall and yards two, three and four. This allowed everyone plenty of space while ensuring comfort and still allowing them to interact at a common barrier if they chose.

Maia to Rana: a Subtle Message

The next morning, when the girls left after breakfast, Guida was in the lead, Maia was not far behind and Rana further behind her. On the way out Maia would stop on occasion to look back at Rana. At first it was hard to tell whether she was waiting for her or whether she was telling her not to come, but it seemed after watching for a bit, to be the latter. Maia was subtly telling Rana she needed more space. Rana obliged and as Maia and Guida went to the far East end, Rana stopped somewhere in the middle grazing on her own. Later that day when Maia and Guida came back through, they spent some time in the same area, not standing next to each other, but grazing in the same general space.  When all of the ladies arrived back at the barn together, there was more posturing, more trunks over heads and butts, Guida trying to grab Rana’s tail and Rana taking it all in stride, sticking to the submissive role. 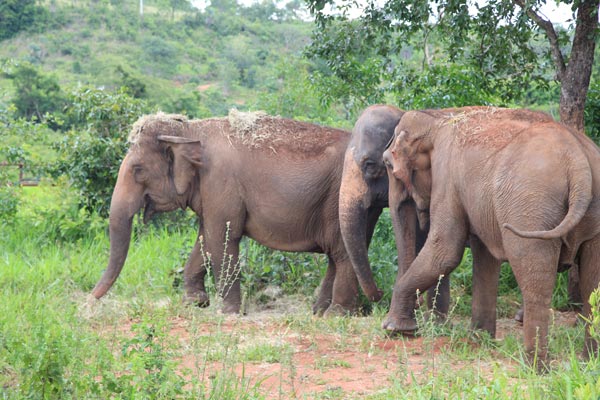 While everything was relatively peaceful there was still a higher than normal level of energy that is common with new arrivals.  Because of this and the monotony that can come from staying close to the barn, the next morning we took Maia and Guida out by the pond so they could swim, relax and decompress a bit.  We thought that Rana might stay a little further back  but similar to the first time, Rana caught up shortly after the girls got into the pond. We don’t call Rana out, she just likes to follow Maia and Guida, so out she came. This time Maia and Guida didn’t get out of the pond, so Rana went in. Again she did everything right, she backed in, gave Guida her butt when she went over to her and the three girls settled in a bit. Guida was a little not gentle with some of her touching, but Rana was happy to be in there, squishing her head into the mud in the corner and rubbing her butt into Maia. Once things got a little more silly, Maia decided that Rana needed to go. Another side note—we have talked in the past how there is a fine line between play and aggression in elephants. That intense play can sometimes spill over into something completely different. Some of you may remember that the first time Maia got intensely silly after she arrived at sanctuary, spinning, kicking her leg up, etc, when this happened, Guida left. It was uncomfortable for her because of that blurry line. This is something we have seen in Maia before.

A Little Space Was in Order 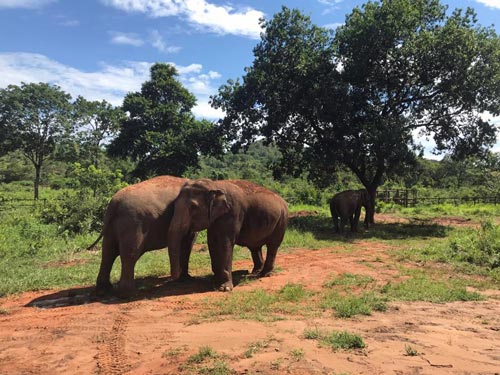 Again, so you don’t panic, there wasn’t a fight. Maia just squeezed Rana off to the side and Rana got out. After Rana got out Maia then threw her trunk around splashing in what taken out of context would purely look like play, but in this instance had an edge of ‘see how tough I am’ to it.  After a bit, Maia and Guida got out and Rana once again tried to engage them in silly, but the girls didn’t want to play. Guida was clearly not nice or welcoming with her interactions and Maia remained pushy, using her body to get between Maia and Guida at one point. Rana would understand and allow them some space, Maia and Guida would then begin to get a little silly with each other and Rana couldn’t help but to try and be part of it, so the same scenario would play out again. Because Rana clearly wasn’t getting the message, at least not for more than 2 minutes at a time (literally) we took Maia and Guida into the woods on one side of the pond and Rana into the woods on the other side. They all needed to walk away for a bit. They continued being in the same general area, but after this small encouragement to give each other space, they stayed apart for the rest of the day

Here is the part where everyone has to try and not feel superbly hurt for Rana. We get that it’s difficult, and we were there ourselves. It’s clear she so wants to be part of what Maia and Guida have, but she’s also not willing to listen to what they are trying to tell her. It’s like the dog who growls 10 times before they finally snap. It is clear that Maia and Guida have tried the gamut of super subtle and sometimes less than subtle ways to try and get some space, but Rana just doesn’t want to hear it. 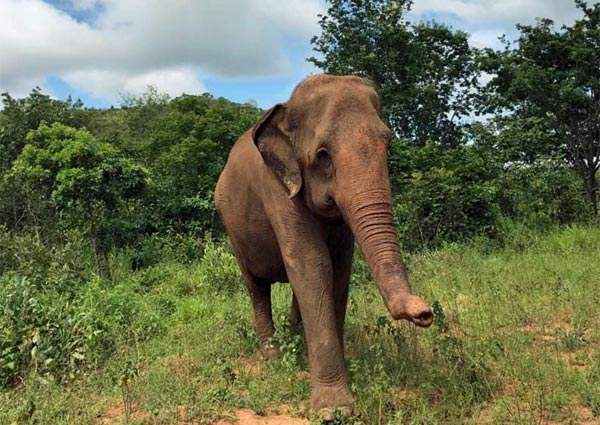 One of the biggest things that captive elephants lose is the ability to communicate, both with each other and with humans. In circus if an elephant even looks like they are thinking something, they are physically punished, elephants in zoos try to communicate issues, but they often go unheard, sometimes for years, so they shut down to trying. Because their relationships with each other are generally so unhealthy or they live alone for a lifetime there is no proper elephant communication and elephant etiquette falls away. At sanctuary it is something all elephants have to relearn, some are just better about it than others. For Rana it seems the most difficult part will be the mutual respect and communication that is a must for any good relationship.

Again, stay tuned for more but first, know that although Rana is not directly part of the trio, at least not yet, she is smiling, glowing, exploring and loving many other aspects of sanctuary life and their interactions get better.

A note about the video- the amount of time all three girls were in the pond was probably about 15 minutes. They had moments that were really nice, but then the balance shifted. We record when we can, but when we see the shift begin, we stop so we can be more present and pay closer attention. We are on the four wheeler and can quickly come and go if needed and always have food for distractions.

Your ticket for the: Behavioral Series 2: Relearning to Communicate