Bambi’s Skin at the Zoo and Now at Sanctuary 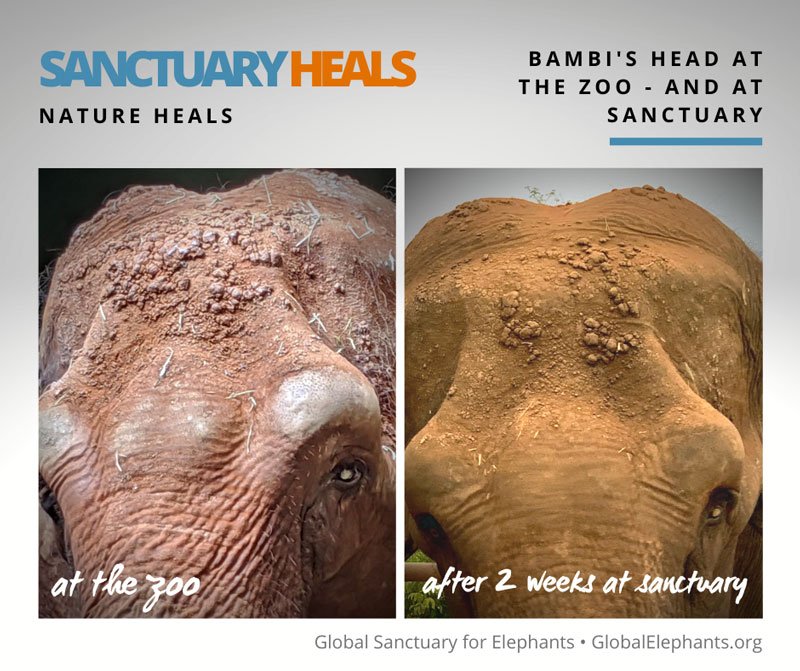 When we first met Bambi at the zoo on September 17th, Bambi had a considerable amount of old skin built-up on her forehead, ears, legs, belly, and even vulva. This was a result of years of not being bathed (we were told she did not like water) or given access to things to rub on or to rub on her skin. This extra old skin had accumulated all over her body due to a lack of moisture and natural substrates to exfoliate her skin with. There were no trees in Bambi’s yard and no access to mud or dirt, and only a small amount of sand. We were also told that Bambi spent most of her time inside the concrete building, so she was not rained upon.

In just three weeks at the sanctuary, with access now to plenty of dirt, sand, mud wallows, trees, and friends to rub on, along with some much-needed rain, she has already removed almost half of the extra skin on her head on her own! In fact, the skin all over her body is looking much healthier. We have sprayed water on her when she has asked for it, which she plays in at times, but we have not bathed her and scrubbed her skin with anything. Access to a natural environment has allowed Bambi to start taking care of her skin herself. Elephants apply sand/dirt/mud as their sunscreen, bug spray, moisturizer, and exfoliant mask.

In some countries in Asia, rocks are used as pumice stones, and plants that form a soap, even sometimes insecticides, are used to give the elephants baths to help them not accumulate old dry skin and parasites. But in captivity, elephants can actually also be bathed too often sometimes. Too much bathing with unnatural substances like shampoo can lead to other problems and infections of their skin.

Letting elephants just be elephants, Bambi knew exactly what she needed to do to take care of her skin with nature.

(Today’s post was guest written by our lovely veterinarian, Trish)

Your ticket for the: Bambi’s Skin at the Zoo and Now at Sanctuary

Bambi’s Skin at the Zoo and Now at Sanctuary