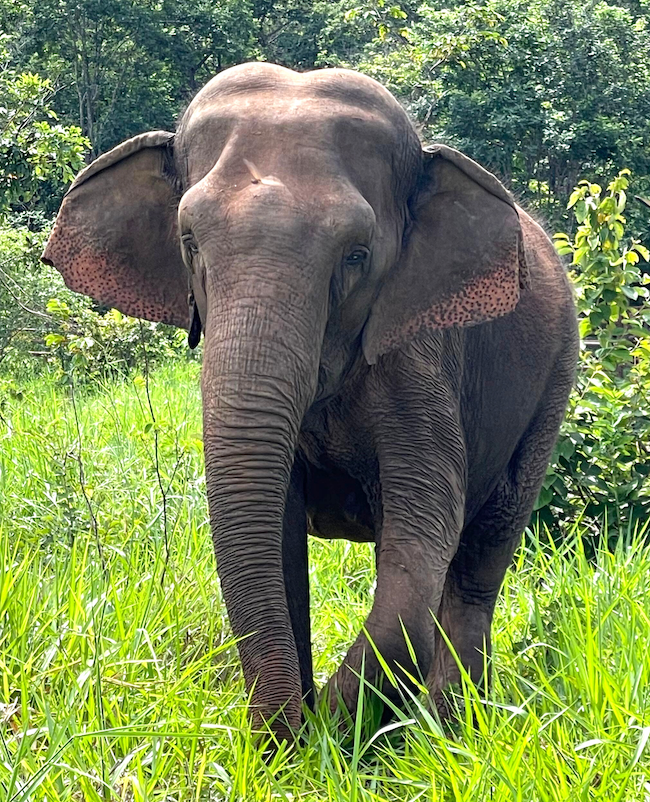 We shared last week that Mara and Maia spent a few calm minutes together, standing very close to one another, with Maia even touching Mara a few times. For some reason, the dynamics among Bambi, Mara, and Rana seem to have shifted a little since then. Perhaps Mara realized that Maia was the same old friend she’s always known, and the interaction between the two of them gave both elephants a bit of a new perspective on how their relationship could move forward.

The day after those few moments between Mara and Maia, Bambi seemed to be keeping some distance from Mara and Rana. She seemed more interested in spending time near the pond on one side of Yard 4, while Mara and Rana were on the opposite end. Any time that Mara and Rana would come near her, Bambi would move away a bit, to keep some distance from the others. She did not seem like her usual, boisterous self, although physically, everything appeared fine.

It certainly was an interesting development that Bambi didn’t feel the need or the desire to stay by Mara’s side. Nothing seemed hostile or particularly drastic – just noticeably different. It’s possible that Maia’s growing confidence is intimidating to Bambi; it’s also possible Mara was acting a little too bossy that day for Bambi’s liking. Or, honestly, it could be nothing. Sometimes an individual just wants alone time, which is natural.

Bambi on an afternoon walk

Your ticket for the: Bambi’s Mood Shifts a Little