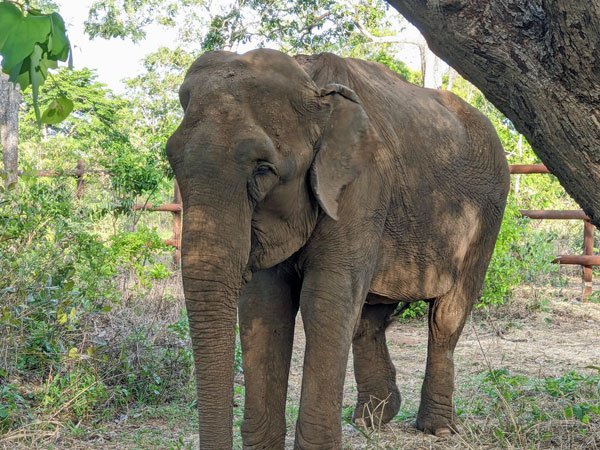 Bambi is continuing to have daily adventures as she adjusts to her new life here. We have a few porcupines that call the sanctuary home. We see them near Alma (the blind tapir) frequently, and they are pretty used to ignoring us – and her. They also are very comfortable around the roosters. We will go out to feed Alma at 10 and regularly see a porcupine, searching for food, about six inches (15 cm) from a sleeping rooster.

It’s been our experience in general that porcupines are laid-back, friendly, and not easily startled. We like having them around, and they generally make us smile. During a recent night feed, Bambi managed to scare a porcupine. We think she scared it just by being so fast and dramatic in her movements. The porcupine took off in terror, running past her, past the water trough, and outside the habitat. It was nighttime, but it was still running as it faded into darkness in the distance.

An elephant’s sense of sight isn’t the strongest, and, of course, Bambi has vision issues, limiting her sight more than most. We don’t believe Bambi saw it before it became frightened because as it ran past her, she made a Big Noise as if she was startled. We hung out with her for a little bit to make sure she felt safe (yes, we know she is larger than a porcupine).

While we were there, Bambi decided she wanted a drink from the water trough, which is the direction the porcupine disappeared. She must have known the porcupine went that way because of how she approached it.

She backed toward the water trough in a submissive gesture, complete with the appropriate submissive vocalizations. We ended up giving her the hose and letting her have a drink further down the fence to make life easier – besides, you can’t drink from a water trough when you approach it with your backside.

She settled down with the hose, and all was good in her world again. It was just charming to see a tiny little porcupine and a not-so-tiny elephant be so dramatic about each other. After she had her drink of water, she made it to her final pile of hay and enjoyed eating all her late-night goodies.

Your ticket for the: Bambi’s Latest Cute Little Drama