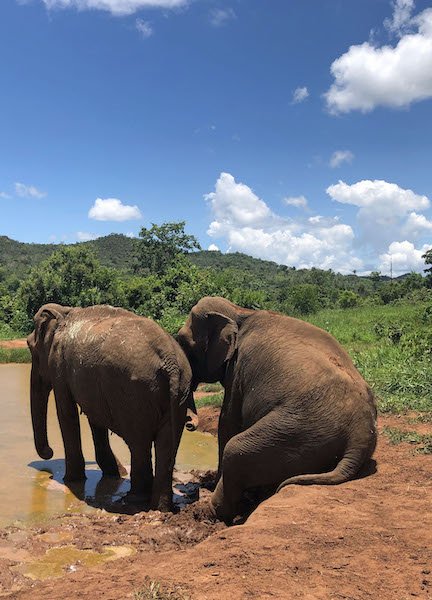 We shared this photo in our Instagram stories, and it got such a positive response we wanted to share it here and include the story behind it.

When Bambi successfully rejoined Mara, she gave Mara a bit of a berth at first. If the three were together, Bambi would choose to be on the far side of Rana or would be a little bit away from Mara. That is now shifting, and Bambi and Mara often side by now. Mara is much more tolerant than she was several months ago. While Bambi is still watchful, she is becoming much more comfortable around Mara. As a result, we’ve had three very happy elephants.

When Scott went out to feed Mara a midday snack, Rana was grazing in the nearby shade, and Bambi and Mara were side-by-side at the edge of the pond. Scott was trying to create some space between Bambi and Mara, so Mara could get her extra food. In response, as Bambi turned around, she just sat on the edge of the pond. She was pretty silly about it, and, of course, Scott laughed. Eventually, Bambi left the pond, but every time Scott tried to approach Mara, Bambi would circle back around to Mara. Finally, Scott settled on just rolling the food to Mara, who would catch it before Bambi most of the time, and actually ended up eating pretty well.

What can we say? There is never a dull day at Sanctuary.

Photo of Bambi sitting next to Mara.

Your ticket for the: Bambi Sits