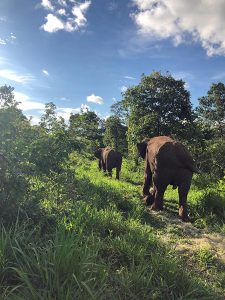 Bambi and Mara have continued spending intermittent time together in the same yard. It is going well overall. Bambi has been very respectful of Mara’s space, but she is still staying near her friend. She will wander off to graze but then come back. Sometimes, Rana is with them, but she isn’t always near. Rana tends to stop by the barn somewhat regularly.

Recently during a night feed, Scott found Rana, Mara, and Bambi together. They were walking along the Yards 4 and 5 divider fence in a line. Scott fed them there, and they ate side by side. Everyone was very respectful of each other’s food.

Scott wasn’t expecting to see all three elephants, so he headed back to the barn to pick up more food for them. He left them all with a decent amount of food, but all three elephants were gone when he returned 10 minutes later. Scott drove around for a few minutes and found Rana and Mara, still together, but no sign of Bambi. He gave Mara her additional food but didn’t look further for Bambi, who doesn’t need as much supplemental feeding as Mara now that she is not as skinny. We have no idea what happened or where Bambi went, but Mara and Rana were both so calm and relaxed that Scott wasn’t concerned.

The next morning, Bambi and Rana were near the barn, and Mara was next to the pond. Later in the day, Mara went to the barn and met up with Bambi and Rana. Overall, everyone seems bright, easy, and good with the sharing of space.

Photo of Mara, walking away after finishing a meal. Bambi, who still had plenty of food left, grabbed her hay and followed Mara so that she could stay near her friend.

Your ticket for the: Bambi, Mara, and Rana Share Space