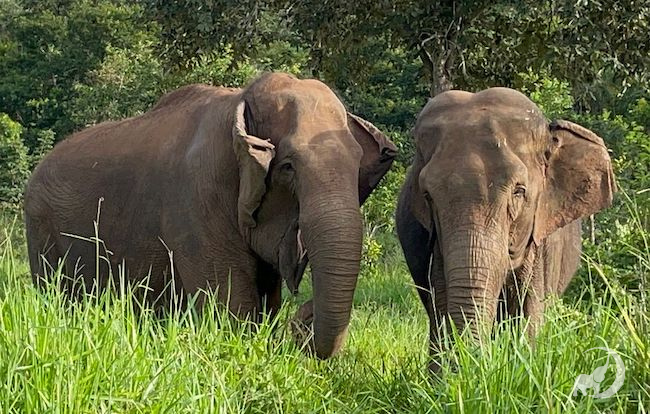 We’ve talked about the raucous parties that Bambi, Mara, and Rana have been throwing at nighttime, always seeming to be instigated by Bambi.

The three of them often begin around 10pm and go for a couple of minutes until everyone is awake and rumbly.

On a recent night, we heard the typical wakeup call from Bambi. She tends to sound off with two or three loud roars. Usually after two, Rana will wake up, and after three, Rana is joining the chorus with her trumpets. All of this eventually wakes Mara up and she starts squeaking. But this time, Bambi had made about five calls and got no response; all we heard was Bambi – and then silence.

One of the benefits of having on-site housing is that we can hear when something is different so, at this point, we are now listening closely. Bambi started roaring incredibly loudly after she didn’t hear either of her friends respond. The other two were either ignoring her or in a deep sleep, and Bambi was adamant about someone joining her. Eventually, Rana did wake up but may have still been a bit sleepy because, instead of her usual loud trumpet, she made a quiet, baby trumpet sound. The two of them were vocalizing back and forth and eventually Rana turned up the volume to match Bambi’s, but Mara still wasn’t responding. Scott and Kat were about to go check on the three of them when Mara finally piped up with a little squeak. Of course, at that point, everyone started rumbling and all three elephants were very noisy with a longer squeak fest from Miss Mara. Our guess is that Mara was even deeper asleep than Rana and it took some extra encouragement to wake her up. Regardless, Bambi, Mara, and Rana all seemed thrilled to continue their nightly tradition.

Photo: Rana and Bambi, spending some time together before the evening’s festivities

Your ticket for the: Bambi Leads More Nighttime Parties