Bambi Crashes Through the Bushes 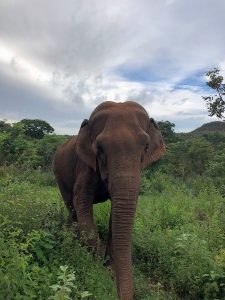 When we recently drove through the habitat for night feed, we heard elephants to our left. We weren’t sure if it was all three or some combination of Mara, Rana, and Bambi. We circumvented the noises, crossed the fence, and waited to see who would show. Sometimes it’s hard to tell the elephants apart based on sounds, and other times it’s completely obvious. We can always tell Bambi’s rumbles. They are incredibly deep, and nobody else sounds like her. Likewise, Mara’s squeaks, which are different than Rana’s squeaks, always give her away.

As we hung out, waiting, we heard someone barreling through the bushes with absolutely no grace. We joked that it had to be Bambi because she is so physically awkward and unaware of her body. As we laughed, we heard the crashing elephant rumble. The rumble gave it away; it was Bambi, crashing through the undergrowth, ignoring the trail. As we saw her shape begin to materialize among the trees in the dark, it became evident that she was approaching this cluster of four decent-sized saplings. A lot of undergrowth is smaller and isn’t damaged when an elephant (or four-wheeler) goes through it; it just bounces back up. Of course, there are also the trees large enough that she can’t just walk through them. These saplings were an in-between size, that is, small enough she would easily knock them down walking but too large to pop back up undamaged. We got her attention, and she seemed to become a little more aware of her body and walked around the saplings (yes, we gave her extra treats for it). A moment after, a much quieter Rana showed up, followed by Mara. We fed them all along the fence, and everyone seemed to enjoy their late-night snack.

Photo of Bambi on the move.

Your ticket for the: Bambi Crashes Through the Bushes

Bambi Crashes Through the Bushes