Bambi and Rana Cause a Nighttime Commotion 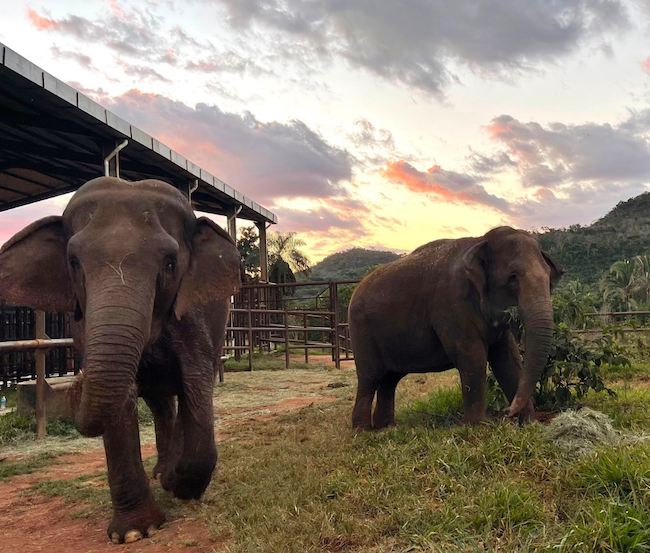 Because Lady has been spending more time in Yard 5, the other four elephants have been given access to Yards 2, 3, and 4. We don’t necessarily keep track of them at night, but we really don’t need to because they give us vocal status updates throughout the evening. Mara, Bambi, and Rana often take advantage of the sanctuary’s nighttime magic to play and vocalize. They sometimes sound a bit like kids who don’t want to go to sleep at bedtime – but since they have no bedtime, they can do whatever the elephant version of jumping on the bed might be.

On this evening, around 11pm, we heard a tremendous amount of rumbling, bellowing, trumpeting, and all sorts of lively noises. Normally, their parties go on for about 10 minutes, with things dying down – but then someone touches someone else – and then it starts all over again. But this wasn’t dying down; they kept going.

When we hear anything out of the ordinary, we always check on the elephants through the camera to make sure everyone is safe. Even though all of the commotion we heard sounded lighthearted, it is better to make sure all is well, particularly when noises keep going for longer than expected. After we determined where the ruckus was coming from, Scott found Rana in Yard 3 and Bambi in Yard 2, both at the divider between the two yards. They were touching one another’s feet between fences, running around, knocking around trees, and generally having a good frolic. Excitable Bambi would run full-speed into the bushes and then come back a few minutes later. We have no idea where Mara was at this point. She may not have felt like playing or they may have been looking for her and, in the process, got split up and turned extra silly.

On Trish’s arrival here, we warned her that she might hear the girls making a bit of noise at night. What might sound to some like an excessive amount of fanfare is an average evening here at Elephant Sanctuary Brazil.

Your ticket for the: Bambi and Rana Cause a Nighttime Commotion

Bambi and Rana Cause a Nighttime Commotion