An Apple a Day? Not For Mara 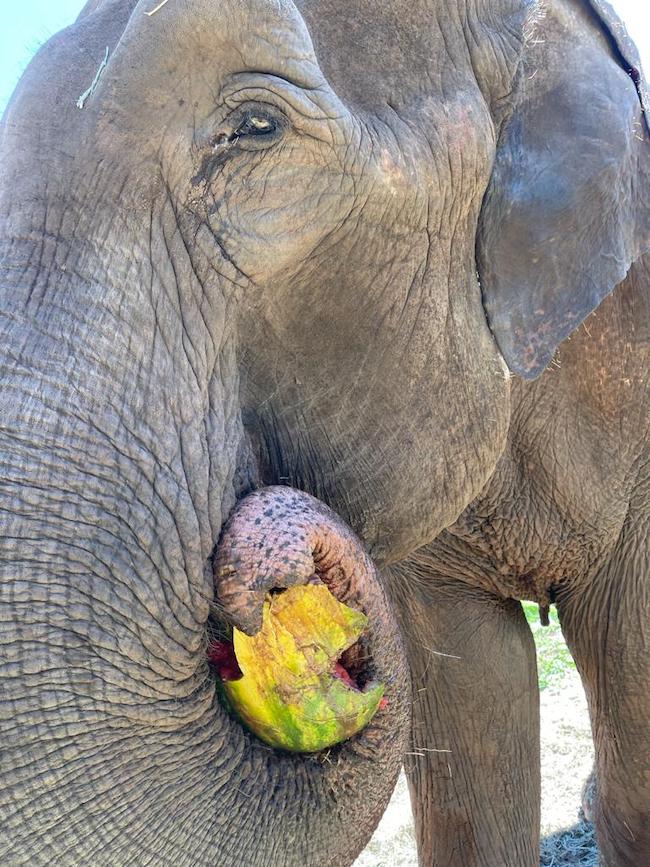 In over 30 years of working with elephants, we have never known an elephant as picky as Mara.

During a recent meal, she began checking her whole apples for medicine. We like to think that we are very clever; however, we are apparently not clever enough to hide an elephant-sized dose of medication in unaltered fruit.

In past attempts to sneak in some medicine, we have hollowed out apples, filled them with medicine, and then sealed them shut with peanut butter. But Mara can tell that those have obviously been doctored. Most elephants are happy with a peanut butter treat and eat the medicine in exchange. We like to think we might outsmart her, but the suspicious Maya figures out our attempts pretty quickly.

Because she had caught on to our tricks, Mara was taking whole apples and biting them open. She would then put the pieces in her trunk like a cradle and use the tip of her trunk to pick through them. Once they passed her stringent inspection, she would eat them. That day, it took her around a minute to eat each apple. We joked that she was probably burning more calories than she was ingesting.

Since Mara didn’t eat much breakfast due to her careful apple inspection, Mateus offered her food about an hour later. Before he went out, he cut buckets of produce into little 4 cm squares (around 1.5 inches) for her. Upon investigating, Mara decided these squares of food were too small to hide medicine, so she ate it all quickly and happily. Of course, eating something well at one meal doesn’t mean she will eat it again at the next meal, but we know that if she ever decides not to eat her tiny cubed fruit, her two friends would be more than happy to assist her.

Your ticket for the: An Apple a Day? Not For Mara

An Apple a Day? Not For Mara