A Need to Taste Everything 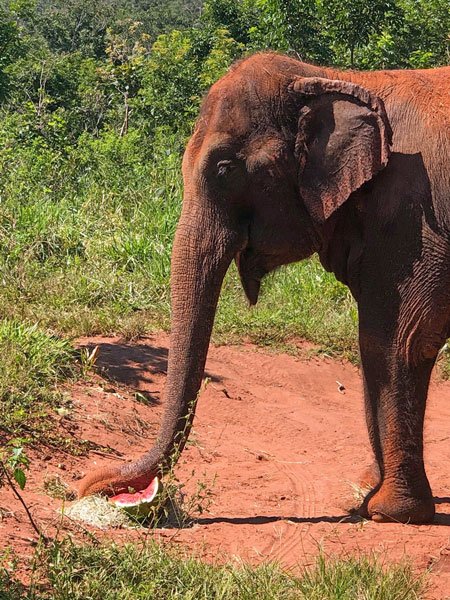 Lady likes to taste pretty much everything – many elephants do, it is why we ensure that all treatments we use (even the bug spray) is non-toxic and safe for mucous membranes. Lady poked her eye on a branch when she was exploring Yard 5 several weeks ago – it was a minor scratch. Still, we treated it with an herbal wash just to make sure it remained a minor issue. The herbal spray dripped in her mouth one of the first times we used it, and Lady decided it tasted delicious. Ever since Lady has wanted to eat everything we use on or around her face. If it is anywhere near her head, she opens her mouth for a taste. It’s pretty cute, but not the best behavior to encourage for safety reasons, so we try not to laugh and act as if it’s not as charming as it is.

Since arriving at the sanctuary, Lady loves standing in the middle of bushes and getting full body scratches by moving around. She leans, wiggles, rubs, kicks, and moves all of her body to reach all of the good spots. It’s one of her favorite pastimes, so it’s not a huge surprise that she gave herself another minor scratch. This time it’s on her eyebrow area.

In her decades before Sanctuary, Lady didn’t have any direct exposure to trees or bushes. She either lost the instinct to avoid scratching her face with trees, shrubs, and sticks or she simply doesn’t care. Elephant skin is very thick on most of their body, but it’s thinner on her face, belly, and ears.

Her new scratch is a few inches above her eye, and, after some discussions, we decided to treat it with a topical ointment. When Kat went to apply it for the first time, Scott was giving Lady treats. The technique is similar to what was shown in her foot soak videos: Scott has Lady rest her trunk in her hand while Kat treats her eye. Lady knows she is supposed to stay until the whistle is blown, telling her the behavior is done.

Kat verbally let Lady know it was coming. She clearly stated, “Ok, Lady, I’m going to touch your eye now” and moved towards Lady. Lady, having become accustomed to the herbal eyewash, assumed she was going to get a yummy herbal spray again. Lady closed her eyes and opened her mouth. Kat applied the ointment directly to her face using her (gloved) finger and stepped back. Lady didn’t move.

Scott blew the whistle, signaling to Lady that the action was over, so she would know to open her eyes for a treat. Lady immediately looked at Kat. She had an expression of, “OH MY!! DO YOU KNOW YOU JUST TOUCHED ME?!?!?! I THOUGHT YOU WERE GOING TO SPRAY ME AND YOU TOUCHED ME?!?!?” It’s wasn’t an angry or worried face; it was a shocked face. Despite her surprise, she still enjoyed her treats from Scott and we tried to stifle our giggles.

To make sure that Lady was comfortable with allowing her eye to be touched again, now that she knew what was coming, Kat repeated the application. Lady leaned in and closed her eye, expecting a touch this time. Once Kat applied the ointment a second time, and Scott again signaled that the behavior was over, they had a little party – with handfuls of cranberries, some watermelon, treats, and human silliness.

That was the end of the treatment session, so Kat and Scott opened the chute for Lady and packed up the supplies. As they walked away, Lady gave a sort of head-nudge/bump, as if she suddenly realized she wasn’t supposed to allow what had just happened. It seemed like she wanted to make a point of making sure that they knew that she knew she was supposed to be mad. At no point did Lady seem angry or upset, which made her head-nudge/bump fairly endearing.

It’s such a difference of who she was a little over three months ago.

Photo: Lady enjoying a meal in the habitat.

Your ticket for the: A Need to Taste Everything

A Need to Taste Everything