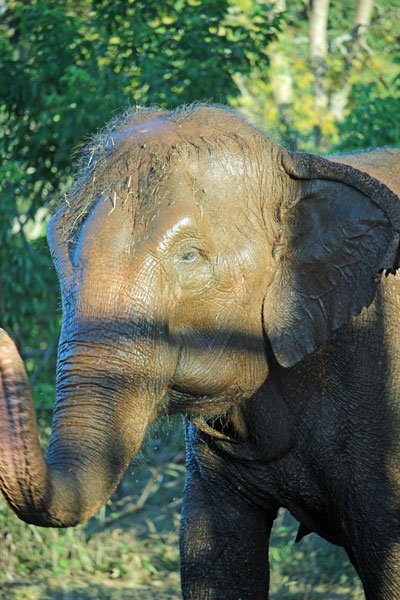 Lady has been spending more time in Yard 5 lately. It’s another larger area for her to explore, and although she sometimes races right in, she doesn’t stay away as long as when she is in Yard 4. One recent afternoon, Scott was bringing Lady into Yard 5 for dinner, and she was following a little slower than usual.

Scott was on a four-wheeler outside of the fence, and Lady was following from her side. They were a little over halfway to the Yard 5 gate when Lady decided to stop following altogether. She stopped pointedly close to the sprinkler. Scott suspected it was intentional, and that she was hoping for a spray. Scott turned off the four-wheeler, leaving it where it was, and walked back to the sprinkler.

He turned on the water flow, and Lady played for a minute. Out of the corner of her eye, she looked down the fence at the four-wheeler, which was about 60 yards (55 meters) away, but fairly close to the fence.

Once Scott was on the four-wheeler again, he got a very cheeky sideways smile from Lady, who seemed almost pleased at making Scott rush back to the four-wheeler. She easily followed into Yard 5, wet and content.

Your ticket for the: A Mischievous Lady