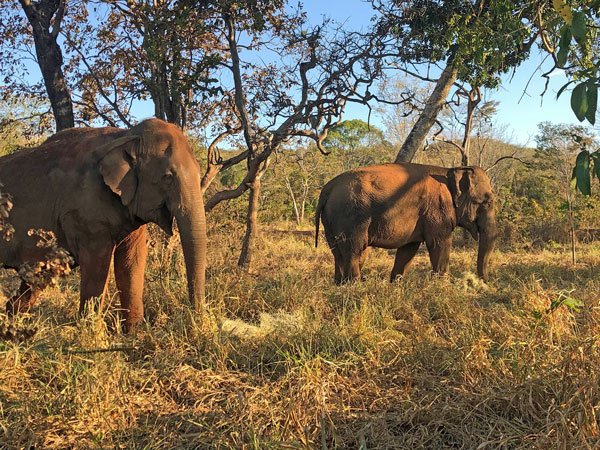 Maia continues to nap on the edge of the ponds, without regard to who is nearby.

One recent morning, Maia, Rana, and Mara were spending time relatively close in Yard 4. Unsurprisingly, Maia wandered off to take a nap in the nearby pond. She slept in the shallow area, where she could sleep deeply with her trunk propped up on the edge of the pond for ease of breathing. Meanwhile, Mara went in the mud wallow and played for a bit. At one point, we peeked at the cameras and saw Mara and Rana watching Maia sleep in the pond. They watched her with interest, but they didn’t seem concerned, just mildly curious about the pond blob. After a while, they started slowly approaching the pond. They ended up around 10 yards (9 meters) away from a sleeping Maia, but still along the edge of the water. Rana began splashing, and then Mara started splashing a little bit after. The two of them seemed to be enjoying playing in the pond, and Maia remained a pond blob a short distance away.

After a few minutes, Rana decided to go into the pond. The water was a little past her wrists on her front legs, and she was just splashing away, having a blast. Rana’s deeper splashing woke up Maia, who popped up out of the water. As soon as Maia appeared, Mara quickly walked a few steps away. Mara knew that the big lump was Maia, but she apparently still was not prepared for the big lump of Maia to move.

Rana stayed in the water at first, clearly torn between following her friend and continuing to play. After a few seconds, Rana got out of the pond and followed Mara.

Maia was cute about it. Fully awake, she got out of the water and grazed for around 40 minutes before returning to the pond to splash for a few minutes and then lay down for another nap.

Your ticket for the: A Little Nearby Splish Splashing Didn’t Awaken This Pond Blob