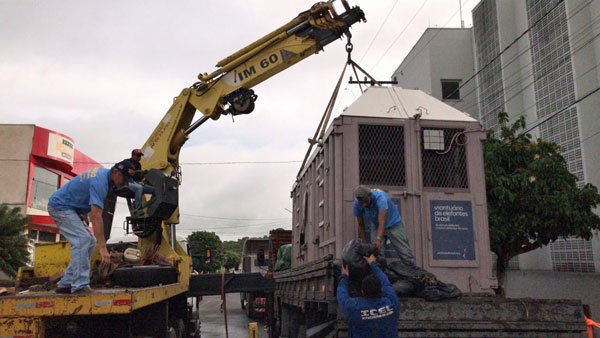 Good morning. No, that’s not the sanctuary, but yes, Lady’s crate is being moved. She is fine, the truck she was riding on is not. The truck broke down last night. Numerous mechanics showed up to try and help, the problem ended up being electrical and wasn’t going to be able to be fixed until late tonight at the earliest. So plans were made last night to get another truck. After many phone calls, arrangements were made for a truck and crane to arrive at 5 am (the earliest they could get) to move Lady over to a new truck and get back on the road.

Lady is doing fine. She is eating and drinking well, although a little agitated again, which is totally understandable. The mechanics were working on the truck until 11 pm, and things didn’t settle down until about midnight. Lady was able to get some sleep after that, but it was a lot of people and noise up until that point. Hopefully, she will settle in once they get back on the road, which they are hoping to do in the next 20 minutes.

So for now, it’s looking like a nighttime arrival. The convoy is around the same area as they were with Ramba on the last day, and they didn’t arrive until 7 pm EST. The arrival may be a little later this time. We will try to keep you updated along the way, but there are big voids in communication along the way.

Your ticket for the: A Later Arrival Today Due to a Broken Down Truck Last Night