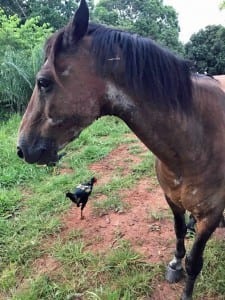 We received a few requests for a Frederick update and he just happened to grace us with his presence yesterday. If you blow up the photo, you can see his cheeky little smile.

Frederick has access to the full 2800-acre property, he is not fenced into a yard and comes and goes as he pleases. This was essentially his life before we showed up- except for when they were using him to herd cattle. He knows the property better than all of us. There have been signs of him at the African barn and we assume he is going there for cover during big storms.

A few nights ago he was amused at how easy it is to frighten a human. I went out to do the last feed for the tapirs (at 10 pm) and heard a noise. As I ducked into the corral and began to pick up fruit from one of the trees there, out of the darkness came his begging noise. Definitely got a jump of a response. The fruit is one of his favorites and he wanted some for himself as well.

When he shows up we pick burrs, sometimes bugs, give him some senior pellets and check him over to make sure he looks ok. During the rainy season he is much like the elephants, he has enough grass and water that he doesn’t truly need us. He has never been a people horse, we couldn’t even touch him when we first arrived- he’s terribly proud and independent. Once things start to dry out is when he spends every night by the house, hoping to steal some of the chicken feed.

For now, he is happily roaming the property and doing very well.

Your ticket for the: Frederick Pays A Visit